This year’s big musical by the Strathcona (High School) Theatre Co. is In the Heights, Lin-Manuel Miranda’s creation with book by Qiara Alegria Hudes, which opened on Broadway in 2008.   It was a good choice for this company and the venue (Westbury Theatre), where a huge crowd of exuberant performers and an interesting detailed set had enough space to tell the story and the risers were filled with parents, friends, and members of the local theatre community.  The Heights refers to the north Manhattan neighbourhood of Washington Heights, a mostly-Dominican neighbourhood. The set for the Scona production had two three-story brick buildings flanking some steps and an elevated walkway at the back of the stage, then a projection screen showing views of the bridge in the background.  The main floors of the buildings were small shopfronts behind metal blinds (“grates”), a beauty salon, a bodega or convenience store, a car service (dispatched taxis) and one graffiti-marked storefront that just stayed closed.  That was never mentioned, but it added to the sense of a neighbourhood in transition.  Upstairs were windows and balconies, which usually had people hanging out of them or leaning on them or looking down from them.  My first thought on looking at the set was that it reminded me of Sesame Street, because that was the only place I’d seen that kind of streetscape as a child.  (That and my brother’s Fisher-Price village.) The main characters are introduced by the young bodega owner, Usnavi (Aidan Burke), whom I thought was a particularly strong all-around performer in this show.  Usnavi’s young cousin Sonny (James Kwak) is an amusing comic foil.  The manager and employees of the beauty salon (Siobhan Galpin, Christina Nguyen, Jade Robinson), struggling owners and ambitious worker of the car service (Kirkland Doiron, either Monica Lillo or Jocelyn Feltham and Evans Kwak), and “everyone’s abuela” Claudia (Manuela Aguerrevere) all have big enough parts that we get to know their stories.  The female lead is Nina (Olivia Aubin), daughter of the car-service family, who is returning home after her first year at Stanford University. I was also impressed by the dance moves and general stage presence of the actor playing Graffiti Pete, but there were two performers platooning in the role and no sign in the theatre telling which one we were seeing.  Either Robbie Wickins or Michael Sulyma.

There were at least 65 energetic performers in the cast as well as a pit band of 14.  This meant that there was always lots to watch, although the ensemble members did not distract from the important plot points or lead character solos.   The Latin dancing in the nightclub scene was great, and the large-crowd dancing in the song “96,000”.  Jordan Mah is credited as AD/ Assistant Choreographer.  Linette Smith directed and choreographed, and the music director was Jenn McMillan. I thought this show was an ideal choice for this company, taking advantage of not only some talented young individual performers but the depth of talent and enthusiasm allowing the director to create a joyful busy community in a high-density neighbourhood.  The story was universal enough to grasp without knowing anything else about the demographics (business owners struggle in a shifting block, city utilities are unreliable in a disrespected neighbourhood, and there is a lot of pressure on the young person who has the chance to succeed outside.)

Attached are some recent photos from the real Washington Heights neighbourhood in upper Manhattan, NYC.  You can see the grates over closed stores, the convenience store, and the grey and black fire hydrants.  Don’t expect this level of background research for all my theatre reviews (especially the one set in Uganda!) but I loved having this prep for my NYC vacation and finding the connections.  And now, back to Broadway! 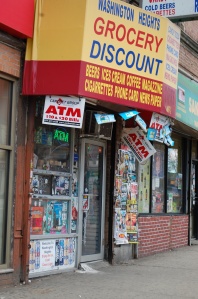