Sometimes a busy Fringe day doesn’t mean seeing lots of shows, and sometimes trying to do too many things in one day means messing up and missing the start of a show at a distant venue because of not remembering the right time or getting involved in a conversation.  I’m sorry I won’t be seeing The Real Inspector Hound after all, and I hope to catch Ask Aggie later.

Yesterday I started the day with Rocket Sugar Factory at the Telus Stage.  Improv partners Jacob Banigan and Jim Libby, based in Austria, come to Edmonton Fringe each year, and musician Jan Randall joins them and enhances their shows with playful piano and additional repartee.  The audience for the early show seemed to be full of people who had seen them before.   This year, apparently, they’re using a different improv structure in each show.  In the one I saw, they played a couple of stories, then after each they asked the audience to identify a point at which a character might have made a different decision, and then they showed an alternative ending.  One scene started with an audience member’s story about encountering a crabby lady in the grocery store.  The other started with suggestions that led to a group of teachers winning a lottery but misplacing the ticket.  One of the strengths of these two artists is the way that they will each create several characters with distinguishing body language and voice, and then the two of them will switch frequently among all those characters to keep the story moving along.   I particularly enjoyed Jim Libby’s portrayal of the perky home-ec teacher Caroline.  I also enjoyed watching the moments when one of them set up the other to do something difficult or awkward and the other did it – performing rap music, lifting the other person up, etc.

In the evening, I queued up outside Strathcona High School so that I could sit in a front-row chair for Dogfight rather than climb up the bleachers.  This was my second viewing of the Strathcona Alumni Theatre’s production of the 2012 musical by Benj Pasek and Justin Paul, directed as usual by Linette Smith.  Most of the show is set one evening in 1963, in San Francisco, where a small group of  young US Marines has their last night of leave for departing for Okinawa and eventually Vietnam.  At the start, end, and intermission, there are also framing scenes showing the main character (Chris Scott as Eddie Birdlace) returning from Vietnam some years later and seeking out the girl he met that night (Emmy Kate Whitehead as Rose Fenny).

That one-line description could easily fit most conventional wartime-romance stories, but this one is different in some disturbing and refreshing ways.  Disturbing, because boy meets girl happens because of a dogfight, a competition among Marines to bring the ugliest girl to a party.  And refreshing, because the shy awkward nominally-unattractive girl Rose takes some control in the situation, calling the Marines out on their appalling behaviour in a way that makes the audience cheer, expressing anti-Vietnam-war concerns in a way appropriate to 1963, and telling him afterwards that she hadn’t been waiting for him.  I was also pleased that it avoided the period-piece tropes of having the young woman be coerced into sex and getting pregnant by a more experienced male partner.  It was clear to this modern feminist viewer that except for having been tricked into attending the dogfight, she wasn’t doing anything that she didn’t choose to do.  His contraceptive precautions were explicit, and his acknowledgement that it was new to him too won the audience over with a round of awws, while we watched Rose’s face receiving this unexpected but touching gift.

Emmy Kate Whitehead and Chris Scott both impressed me with the way they met the singing and acting demands of the lead roles.  Sydney Williams was heartbreaking as the streetwise prostitute Marcia and had a beautiful solo later as another character.  Kyle Thulien played several small roles (sergeant, drag nun, snooty waiter) and was spot-on as a sketchy lounge singer.  Gabe Richardson’s character Ralphie Boland was a nasty piece of work and Gabe added a swagger and a smirk that made me shudder.

The musical ensemble, under the direction of Matt Graham, was good, and the sound was well-balanced so that I could hear all the words.   The choreography was fun to watch and suitable to the story, especially the chair choreography (in unison, in army boots, by Scott, Richardson, Aidan Burke, Alex Aoki, Jordan Mah, Evans Kwak, and Michael Vetsch) and the impressions-of-war scene.   Jocelyn Feltham played Rose’s mother with gentle concern and no overplayed fuss.

There were two things I didn’t like about this show.  It ran overtime in both performances I saw, finishing at about 10:20pm rather than the published time of 10:00, and that is frustrating on a busy Fringe evening.  I don’t know whether a correction had been posted at the info tents, but it’s not on the Fringe website and wasn’t posted at the venue or in the program.  I will keep buying tickets ahead of time and driving down to Strathcona High School to see whatever challenging modern musical this company produces in future years, because they are good and they are local.  I would keep going even if the shows were three hours long.  But I want to know ahead of time.   I also didn’t feel comfortable with the stereotypical aboriginal character Ruth Two Bears (Olivia Aubin), shuffling and drinking stone-faced in buckskin and braids.  I wouldn’t be surprised to learn that the portrayal in this production was toned down from earlier productions elsewhere, but it still made me wince.

Dogfight is, of course, sold out for the balance of its run.  Last year an additional performance of Rent was announced for the final weekend, but I think it was announced midweek.

Our show Sonder was not sold out the last time I checked.  We perform this afternoon (Thursday) at 4:00 pm, and Saturday at 6:45 pm.  We’re at King Edward School, an easy walk across a playground from the main Fringe grounds and in a neighbourhood with some free parking, and running time is just under an hour.

This year’s big musical by the Strathcona (High School) Theatre Co. is In the Heights, Lin-Manuel Miranda’s creation with book by Qiara Alegria Hudes, which opened on Broadway in 2008.   It was a good choice for this company and the venue (Westbury Theatre), where a huge crowd of exuberant performers and an interesting detailed set had enough space to tell the story and the risers were filled with parents, friends, and members of the local theatre community.  The Heights refers to the north Manhattan neighbourhood of Washington Heights, a mostly-Dominican neighbourhood. The set for the Scona production had two three-story brick buildings flanking some steps and an elevated walkway at the back of the stage, then a projection screen showing views of the bridge in the background.  The main floors of the buildings were small shopfronts behind metal blinds (“grates”), a beauty salon, a bodega or convenience store, a car service (dispatched taxis) and one graffiti-marked storefront that just stayed closed.  That was never mentioned, but it added to the sense of a neighbourhood in transition.  Upstairs were windows and balconies, which usually had people hanging out of them or leaning on them or looking down from them.  My first thought on looking at the set was that it reminded me of Sesame Street, because that was the only place I’d seen that kind of streetscape as a child.  (That and my brother’s Fisher-Price village.) The main characters are introduced by the young bodega owner, Usnavi (Aidan Burke), whom I thought was a particularly strong all-around performer in this show.  Usnavi’s young cousin Sonny (James Kwak) is an amusing comic foil.  The manager and employees of the beauty salon (Siobhan Galpin, Christina Nguyen, Jade Robinson), struggling owners and ambitious worker of the car service (Kirkland Doiron, either Monica Lillo or Jocelyn Feltham and Evans Kwak), and “everyone’s abuela” Claudia (Manuela Aguerrevere) all have big enough parts that we get to know their stories.  The female lead is Nina (Olivia Aubin), daughter of the car-service family, who is returning home after her first year at Stanford University. I was also impressed by the dance moves and general stage presence of the actor playing Graffiti Pete, but there were two performers platooning in the role and no sign in the theatre telling which one we were seeing.  Either Robbie Wickins or Michael Sulyma.

There were at least 65 energetic performers in the cast as well as a pit band of 14.  This meant that there was always lots to watch, although the ensemble members did not distract from the important plot points or lead character solos.   The Latin dancing in the nightclub scene was great, and the large-crowd dancing in the song “96,000”.  Jordan Mah is credited as AD/ Assistant Choreographer.  Linette Smith directed and choreographed, and the music director was Jenn McMillan. I thought this show was an ideal choice for this company, taking advantage of not only some talented young individual performers but the depth of talent and enthusiasm allowing the director to create a joyful busy community in a high-density neighbourhood.  The story was universal enough to grasp without knowing anything else about the demographics (business owners struggle in a shifting block, city utilities are unreliable in a disrespected neighbourhood, and there is a lot of pressure on the young person who has the chance to succeed outside.)

Attached are some recent photos from the real Washington Heights neighbourhood in upper Manhattan, NYC.  You can see the grates over closed stores, the convenience store, and the grey and black fire hydrants.  Don’t expect this level of background research for all my theatre reviews (especially the one set in Uganda!) but I loved having this prep for my NYC vacation and finding the connections.  And now, back to Broadway! 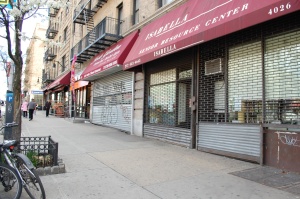 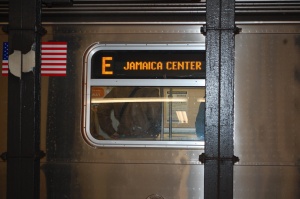