My mother was very fond of Gilbert and Sullivan.  She and I went together to the Stratford Festival a few times, to see Iolanthe, and I think Pirates of Penzance.  The next year I thought I was giving her an extra treat by getting tickets to Hamlet.  (Later that season I also got to see Rosencrantz and Guildenstern are Dead, in repertory with the same cast.)  But on the way home, she confessed with embarrassment that she hadn’t enjoyed the Shakespearean tragedy as much, and for the next Mother’s Day could we please go to another Gilbert and Sullivan operetta?   For her, it seemed that watching Shakespeare was a virtuous duty, and watching Gilbert and Sullivan was such a guilty pleasure that she didn’t deserve it, even as a gift.  That seemed odd to me, even for a former high school English teacher, because I already had the idea that theatre should be fun, just like books and movies and other ways of telling stories.

A similar confusion of duty and pleasure lies at the heart of Patience, the Gilbert and Sullivan operetta running until Sunday night (Jun 11) at Capitol Theatre in Fort Edmonton Park.  Patience, a naive and earnest milkmaid, has so little experience of love (“only for a great-aunt” she says, when asked by one of the chorus of lovesick ladies) that from observing the pining chorus and hearing that love is unselfish, she comes up with the idea that if it’s joyful and pleasurable it isn’t true love.  Therefore, it is more virtuous for her to marry a man she detests.

This odd interpretation leads to various nearly-implausible repercussions for all the characters’ romantic aspirations, but of course this being a Gilbert and Sullivan work, almost everyone ends up happily paired at the end.

There are many other ways this production, directed by Robert Herriot and conducted by Kathleen Lohrenz Gable, is an admirable example of what Gilbert and Sullivan were known for.  There is a large chorus of ladies and of Dragoon Guards, and lots of romantic happy endings.  There are long verses of rapid rhyming iambic feet as clever as rap lyrics, there are ridiculous characters with preposterous motivations, and there are opportunities to show off some very impressive voices.

Of particular note are the singing of Patience (possibly Charlotte Stewart-Juby, soprano, in the performance I saw), and the comedic portrayals of Meghan Goguen (mezzo-soprano) as Lady Jane and Justin Kautz (baritone, better known locally as one of the principals in Toy Guns Dance Theatre) as Reginald Bunthorpe.   Timothy Carter (tenor) was also delightful as Archibald Grosvenor. 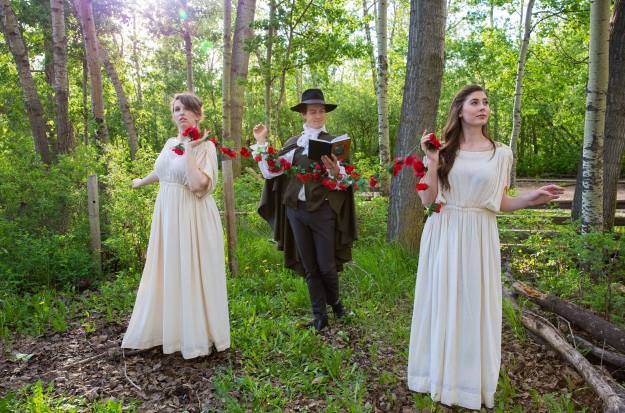 Justin Kautz as Reginald Bunthorpe, garlanded by two of the lovesick maidens.

The chorus of “twenty lovelorn maidens” – actually about fifteen, which probably didn’t distract anyone else except me – was delightfully costumed in faux-Hellenic draperies in a pastel rainbow of shades, striking a series of expressive aesthetic poses in attempts to emulate and attract flamboyant poet/poseur Reginald.  I giggled a lot during this show, starting with the maidens’ first entrance.  Later in the play the robes and art-book poses are repeated in an even funnier way.  Good use was made of the various entrances to the auditorium, which helped make the proscenium-stage space more intimate.  Musical accompaniment was provided by one pianist, Kerry Agnew.

Opera Nuova’s festival of opera and musical theatre continues over the next two weeks with performances of Tchaikovsky’s Eugene Onegin, Leoš Janáček’s The Cunning Little Vixen, and the Rogers and Hammerstein musical Carousel as well as some other concerts and master classes.   Performances occur in various venues around the city and with a range of prices, allowing more audience members to attend.