Last night a gathering of friends met up for a celebration at Madison’s Grill in the Old Bank Hotel on Jasper Avenue, having discovered that many Edmonton fine-dining establishments aren’t open Sunday evenings. I was glad of the excuse to try somewhere new to me, and I enjoyed a good meal with friends. Our server told us that they could do wine pairings, drinks chosen to suit three courses, for $35, so I said I’d do that. I never did get around to looking at the rest of the wine list, and although I was shown the labels of everything I drank I didn’t write down enough information to order them again.

My appetizer was beef carpaccio, along with some light but interesting Beaujolais Villages. It was served with some very lightly dressed arugula greens and shaved hard cheese (Grana Padano). The meat was so thinly sliced and tender that I couldn’t pick up a whole slice with my fork, and the delicate flavour made it seem to melt in my mouth. And the garnishes were subtle enough that they didn’t distract. My absolutely favourite carpaccios have a little more of the savoury meat mouthfeel, but I would definitely have this one again.

For a main course, I had the sea bass, moist and simple with a lightly-crisped skin. Alongside it were some seasoned rice and grilled seasonal vegetables, again nothing dramatic or unusual but not overcooked or overseasoned. The wine was a cold Gewurtztraminer from Alsace, with that bright-shiny appearance, a crisp smell reminiscent of flowers (hibiscus?), apple juice, and spice. It worked well with the meal. The portions were just the right size for me, enough to please my palate and make me comfortably full with room for dessert.

There were lots of things I would have liked to try on the dessert menu and on the “holiday” additions page, but I settled on the banana-rum crepe with inn-made cinnamon ice cream, and it was also very good, especially the ice cream. To drink with it, I had some Ratafia dessert wine from Peninsula Ridge winery in Beamsville, Ontario, very close to where I grew up. It was not too sweet, and combined very well with the texture of the ripe bananas.

The menu at Madison’s Grill is simply written, without a lot of extraneous geographical name-dropping or adjectives. Snooping at my friends’ plates and asking them about their dinners gave me the impression that everything was actually more interesting than I could picture it from the menu, and everyone seemed to like what they had. The restaurant was not full on a snowy Sunday evening, and the service was attentive. One patron at a table behind me had a carrying voice with distracting snippets of stories, but the atmosphere was otherwise very pleasant and comfortable. There is a big gas fireplace, padded chairs that are not too tall for me, room between the tables, and some dining tables set beside couches. Including my share of the 18% tip written in for large parties, and the three glasses of wine, my meal cost about $100. So I wouldn’t go there often, but I was glad I went.  You can look here for the menu, and elsewhere on the Inn’s website for information about parking (transit is easy, because it’s right by Central LRT station and a block away from the big bus transfer point at Telus Plaza), but be warned that the website plays music on every page as a default. 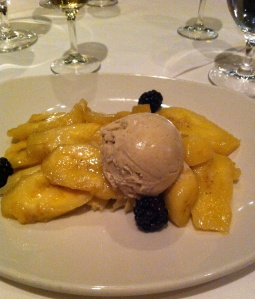