The other night, before the wildfire smoke blew in to town, I was walking in my neighbourhood in the evening about how lucky I am to be living at this latitude, with the magical long twilights as we approach the summer solstice.  The long light warm evenings feel rich with extra opportunity.  And I wondered how to share that feeling.

Last night I watched Foote in the Door’s production of A Little Night Music, a Sondheim musical based on an Ingmar Bergen movie directed by Mary-Ellen Perley.  It’s set in Sweden around 1900.  The second act takes place at a country estate, much of it outdoors.  And there are songs about that magical extended twilight, songs that describe the feelings better than I ever could, with lighting (Sarah Karpyshin) and abstract set pieces (Leland Stelck) to support them.

A Little Night Music has a cast of 18.  At first I kept referring to my program to figure out who was who and how they were connected.  But later on, it just made more delightful threads of plot arcs to follow, to wonder how the cat’s-cradle of romances and affairs would untangle itself.   Commenting on the liaisons and prospects of the others, and on the nature of love in general, are a grandmother (Pauline Farmer) and granddaughter  Fredrika (Rebecca Erin Curtis, a MacEwan grad I will watch for again).

I loved the detail, consistent through the show, that star actress Desiree (Glynis Price) was surrounded by clutter and chaos – stockings and scarves draped over her furniture, enough male visitors that they cross paths in her apartment – her current lover Count Carl-Magnus Malcolm (Russ Farmer) and her former lover Fredrik Egerman (Morgan Smith), both sporting mustaches of importance.  Count Malcolm’s indignant wife Charlotte (Monica Roberts), a likeably sarcastic character, comes up with a unlikely scheme to defend both herself and Egerman’s young wife Anne (Ruth Wong-Miller) from Desiree’s designs on their husbands.   Anne is an astonishingly naive 18 year old.  She claims to love married life but seems oblivious to being more passionate about teasing her stepson (Allan Cabral) than about her much-older husband.   It was “amusing” (as the character often says) to watch Wong-Miller in this role, since she usually plays characters with more agency but was completely believable as the protected and petted young wife.   Desiree’s daughter Fredrika, canonically about 13, seemed to be wiser with more understanding of the world and relationships, just from listening to her grandmother’s stories of liaisons and from having toured with her mother’s acting troupes. 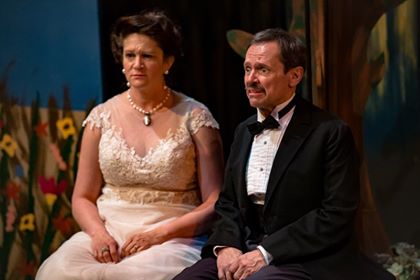 Monica Roberts, as Charlotte, and Morgan Smith, as Fredrik, in A Little Night Music. Photo by Nanc Price Photography.

There were a lot of bits in this production that had me laughing out loud – some of them were funnier to me than to other members of the audience.  The part where Fredrika’s grandmother says that she brought Fredrika home to do a better job raising her because “ Stage managers are not nannies, dear; they don’t have the talent.”  The bit where Fredrika takes Anne to watch Desiree on stage in a French comedy, the play-within-a-play a more exaggerated version of the grandmother’s liaison stories and the contemporary affairs and intrigues, and Brian Ault playing a footman or herald in a truly bizarre wig.

One of the common features of Sondheim musicals is complex music.  Daniel Belland is musical director, with an ensemble of eight other musicians.   As well as the characters named above, there are several servants, some with their own romantic plotlines, and a chorus of six, singing clever harmonies and hinting at further layers of complication (“Remember”) that we don’t get to see.

A Little Night Music is a musical for people who like musicals, a change from this company’s last production, the stage-musical version of Dirty Rotten Scoundrels.  It’s long but it moves along at a good pace and I was surprised when it was already time for intermission.  It’s playing at La Cité Francophone, until June 8th, with tickets through Tix on the Square.

Stephen Sondheim’s 1970 musical Company shows us a group of friends in their 30s, five married couples and the single guy, Bobby (Russ Farmer in the current Foote in the Door production).

In a series of gentle vignettes, we see glimpses of each couple’s relationship and challenges.  We see that Bobby is friends with everybody, good company, as he spends time with each couple.  Harry and Sarah (Stefan Rumak and Melanie Lafleur) talk to Bobby as a way of complaining about each other’s habits (his drinking, her eating sweets).  He’s best man for Paul and Amy’s (Alan Cabral and Ruth Wong-Miller) wedding – or he would be, if they agree to get married.  Joanne (Kärin Thomas) enjoys flirting with Bobby and telling him about her past husbands while devoted present husband Larry (Joe Garreck) looks on.  Susan and Peter (Athena Gordon and Trevor J.) explain to Bobby that being divorced makes their marriage work.  Bobby smokes weed with David and Jenny (Simon Yau and Kara Little).  All of them fuss at Bobby about not being married and try to find out why he’s not married – and Bobby doesn’t seem to know either.

We also see Bobby with three love interests, naive flight attendant April (Victoria Suen, whom I last saw in Lizzie), Kathy, who’s moving away but says she would have liked to marry him (Alyssa Paterson), and Marta (Emily Smith), one of my favourite characters, who is wholeheartedly in love with New York City and with life.

And I should mention that it was fun to spot assistant director Gerald Mason playing bartender and what seemed to be a nightclub full of show orchestra members and assistant stage managers dancing in the dark.

It wasn’t the plot-heavy kind of production full of big character journeys and closure, but rather was full of lovely examples of longterm love and friendship and of people accepting who they are and being comfortable.  My favourite part was “Getting Married Today” in which Ruth Wong-Miller’s character has hilarious physical and emotional range in a wedding dress.  I also enjoyed “Side by Side by Side”, which was a great showcase of choreographer Adam Kuss’s contributions, and Bobby’s final solo “Being Alive”.  There are also many other touching and/or delightful moments which I won’t tell you about so you can discover them for yourself, with just one hint:  Trevor J. lets his hair down.

I admired how Morgan Kunitz’ direction integrated everyday smartphone use into a script from 1970 without looking anachronistic.

Company is playing at L’UniThéâtre until April 28th.  And if you haven’t been to the big auditorium at La Cité yet this season, you will be pleasantly surprised by the new audience seating, which is much more comfortable than the previous seats.